THE NUMBER ONE BEST PLACE TO LIVE IN THE WESTERN STATES?

THE NUMBER ONE BEST PLACE TO LIVE IN THE WESTERN STATES? 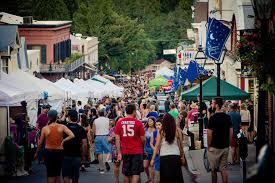 Here is a reprint of the article by Christine Ryan:
WHERE THE SUMMER OF LOVE NEVER ENDED
“Ask Matthew Ticciati to describe his first Halloween after moving to Nevada City in the Sierra Foothills, and at first you get the happy clichés of rural life:  the whole town dressing up, every porch lit with a jack-o-lantern, the neighbor who gives out 2,500 pieces of candy.  But then the clichés stop.  ‘The best costume?  A kid who came as No Face from the Japanimation classic Spirited Away.  That was pretty great,’ he says.  Lots of Gold Country towns have quaint main streets and affordable Victorians like the one Ticciati and his wife are fixing up—but fellow parents who would dress up their 10-year-old as a Hayao Miyazaki character?  That takes a certain artsy sensibility, which is exactly what’s luring big-city escapees like the Ticciatis to Nevada City.  It also doesn’t hurt that the alt-folk musician Joanna Newsome hails, famously, from here.
That counterculture dates back to the 1960s, when young back-to-the-landers drifted away from the Bay Area to colonize a half-empty logging town.  Today, those hippies have become the establishment, and the town they rescued boasts a 150-year-old brick theater stat still stages live plays and dance performances; a foundry turned venue that books the likes of John Doe and Bonnie Prince Billy; not one but two annual film festivals; and a charter K-8 school dedicated to the arts.  Because when it comes to a solid grounding in Japanese cinema, you’ve got to start them young.”
If you want to live in Nevada City, California, call CJ at 530-906-1023
Click here for more tidbits about Nevada City