The North Fork in Winter Voice

The North Fork in Winter Voice 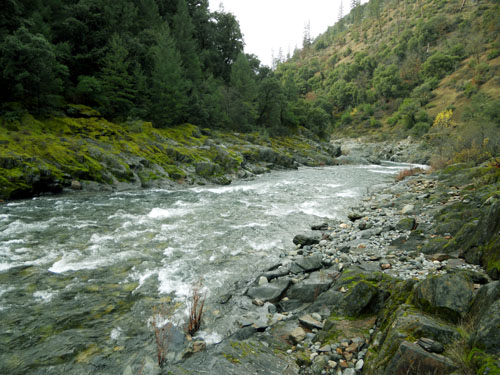 You should walk or run along the magnificent Stevens Trail above the North Fork of the American River during the winter.  As soon as you crest the rim and drop down into the canyon you will begin to hear the river in full voice, at first just a background murmur, then, as you get lower and lower, the deep roar of whitewater rapids as the American swells with runoff from the first winter rains.

In an earlier blog I photographed the Stevens Trail, just outside Colfax, California, but a winter excursion reveals new images of Mother Earth at work.  This part of the canyon was devastated by the Cape Horn fire several years ago, one of those uphill-express crown fires that crispy fry everything in its way.  Sometimes the soil itself  is “volatized” and rendered sterile by such super-hot fires.  I have seen these fires follow tree roots right down  into the ground.  After the fire, when I was finally able to run Stevens Trail , I was heartbroken.  I thought the area would take decades, maybe centuries, to recover.

Nope.  The canyon is coming back so fast I am astonished and delighted.  Here you can see the noble ponderosa pines in recovery.  Last year, they were blackened sticks, but there was enough energy stored in the deep roots for one last explosion of greenery, enough to restart the cycle of photosynthesis.

You are compelled to look down at the American River hundreds of feet below.  Go ahead, the trail follows the river all the way to the bottom.

Here on your winter run, however, try to sneak a few peeks uphill.  The beauty is less obvious, but just as gratifying in more subtle images.

What’s that ahead?  Ah, your Earth Momma at work.  She shrugs, and there’s a landslide covering the path.

Dharma, noble companion, astride the landslide.

In the winter, much of the deciduous  foliage has dropped, exposing other beauties usually hidden away.  Here, near “Dharma Pool” was an unexpected patch of ferns.

With the extra run-off from the first rains, little rivulets and waterfalls are everywhere.

Dharma, of course, has to try out every pool or puddle.

The California state rock is serpentine, an ordinarily nondescript rock until washed by the rain when it glows like pale jade.

The American River still carries a bit of gold.  There’s not enough for commercial purposes, but hobbyists and amatuers make a few bucks panning for dust and small nuggets.  Down at the bottom of the trail, I ran through a miner’s camp.  These rough quarters are still common along the three forks of the American.

One the way back out of the canyon, the sun came out for a little bit and the moss on the trees glowed with an emerald phosphoresence.

Can you tell how much I love my American River Canyon?