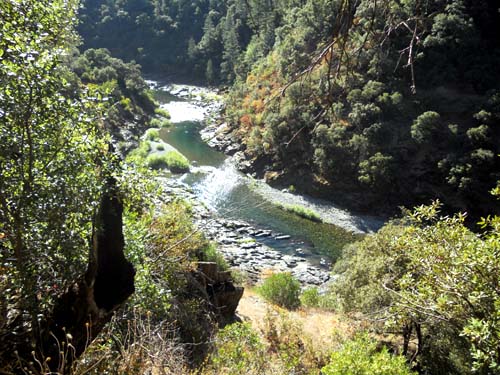 If I had to choose the best running trail in the Sierra Foothills, I’d pick the Stevens Trail in Colfax, California.  The trail is named after Truman Stevens who developed it as a toll road back in the Gold Rush.  It was supposed to connect Illinoisville (now Colfax) with Iowa Hill.  It never made Truman rich, but I don’t care.  When you stop to think about all the Indians who were displaced, the Chinese workers who were exploited, and the land which was devastated, it’s hard to muster up much sympathy for the 49ers who went broke.  Tough.  But, thanks Mr. Stevens for the trail.

The scenery, history, and variety of this spectacular single-track is unmatched.  It’s also challenging.  You begin at a nice trail head parking lot then descend 4.5 miles down to the North Fork of the American River.  Then you turn around and climb 4.5 miles back up out of the canyon.  If you cannot run 4.5 miles uphill, then get in shape before you take on the Stevens.  But if you can handle the run back to the trail head, this adventure is worth the effort.

The trail head is a mile down a dead end road near I80, right within the city limits of Colfax.  You can, in fact, hear the freeway, and maybe a train as the California Zephyr rattles down nearby rails.  Those sonic reminders that you are in living in the Twentyfirst  Century fade away after the first couple of minutes.

The first mile of the trail descends gently through mixed-growth forests, some of the prettiest green woodlands you will see up in this rugged brown hill country.

There are three small rivulets on this stretch where Pooch can get a drink.

After a mile you come to a creek where the dog can get wet.  There’s a plank bridge for you to cross.  In summer, this may be the last watering hole for about 2.5 miles.  Make sure Pooch gets wet and a big drink.

Crossing the creek, you’ll see a directional sign advising you to turn right.  The next quarter mile is an unfortunate dirt road, illegally constructed in 1978, but it’s the only road section of the trip.  It’s also uphill.  Cherish it, because it will be the only downhill rest you’re going to get on the way home.

Run down through oak forests, more typical of the area.  In a few minutes you will see a sign telling you to go left (runners) or right (horses).  Either way, the two trails will rejoin in about a half mile, so it doesn’t matter which one you take.  I prefer the trail to the left, also called the “Upper” trail.

On this section you begin to see the lingering damage of the great Cape Horn Fire of  August, 2004.  That fire burned uphill, a true crown fire.  It got so hot that it actually killed all the big trees.  It’s green, now, but all that vegetation is young growth. It will take Ma Nature a couple of hundred years to put things right.  A blink of Mother’s eye.

The trail seems to peter out in a jumble of boulders, but look carefully and you can still discern how it threads its way through the rocks, most of which are sepentinite, the state rock of California.  When serpentinite gets wet, it turns a rich shade of green.

Moving through the rocks you will find, after the rains start, a perky little waterfall. Obviously, in this photo, the rains haven’t started.  But there is shade if you need to rest.

When you get to the place where the Upper and Lower options rejoin themselves, you are ready to begin the really big show.  You’ll cross through a debris field.  This is a steep section below a roadway blasted out by Chinese workers lowered in baskets with dynamite.  Many of these workers were killed in the endeavor.  It’s spooky.  I’ve probably seen more snakes on this part of the trail than anywhere else.  I wonder . . .

In just a minute you will pass by the opening of an old gold mine.  The opening is called an “adit.”  Have a look, but don’t go in there.  OK, fool, do it, but I warned you.

Instead of wandering through a dank, dark, creepy old hole in the ground, look off to your right.  You will see the first of endless scenes of the river below.

That’s the Mississippi Bar Bridge.  The Iowa Hill Road goes over the river there from Colfax to Iowa Hill.  Iowa Hill is . . . unsettling.  They do not have electricity up there, but they do have gunfights in the streets.  I am not making this up.  Lots of rough characters; lots and lots of drugs.  They don’t much like strangers in Iowa Hill.

One of the challenging aspects of the Stevens Trail is that it is damn hot in the summer.  One early morning run I discovered why.  The canyon is oriented so that the first morning sun rises up exactly in the east end.  The canyon gets warmed up at first light, and as the sun tracks right down the canyon all day, it stays hot.

I like that.  To me a great trail is a challenging trail.

Down, down, down we go.  At the 3 mile point, there’s a reliable little steamlet and a pool just big enough for a dog.  I call it Dharma Pool.  Any objections?

You emerge from a shady forest onto a section of exposed trail that falls off steeply to the right.  Don’t fall.  One day on the way back up, I looked down toward the river and saw a mighty bald eagle flying silently below me.  That’s a sight you don’t see often, bald eagle, from above.

That eagle reminds me of other wildlife I have seen on the Stevens trail.  In addition to the eagle and rattlers already mentioned, I have seen the other three apex predators of the region: lions, coyotes, and bears (Oh my)!  If I told you about these creatures at the beginning of this article, you might have declined my invitation to run Stevens, but now you’re here, so you might as well finish.  It’s just another mile.  Besides I have a surprise for you at the bottom.

But before we get to the surprise, I will show you one of the sublime treasures of this trail.  I discovered it by accident, so I figure that I get to name it.  I call it Luke’s Pool.

Simply put, this is one of the most sensational swimming holes I’ve ever enjoyed.  It’s clear and deep.  There’s lots to see.  It’s so fantastic that Luke and I  run down here with our snorkel gear in a backpack just to take advantage of the diving.  You can see the photos, but I’m not going to tell you exactly where it is.  But I’ll show you, if you run down here with me.

Usually, I save the swim at Luke’s Pool for the trip back.  Because, guess what?  We’ve made it down to the river.

First, we cross a respectable creek.

At the right time of year, you can pick blackberries along this creek.  In a few seconds you will find a small clearing with a fire ring.  Usually it’s empty, but occasionally bearded rustics camp down here to pan for gold.  Some are friendly, and from others, keep your distance and slide on further upstream.  Not too far, maybe a hundred yards.

This is the spot where an old toll road, long since disappeared, crossed the river.  But that’s not what we’re hear for.  Go down on the rocks and take off your shoes.  No gold miners around?  Take off all your clothes.  Sit in the sun with your feet in the water and listen, just listen.

At first you will mostly hear the river as it rushes over and around the rocks.  Listen closer, the wind.  Birds.  Insects.  Listen closer.  There, in the spaces between the other sounds, you may hear the faintest echoes of women singing.

This was the spot where the women of the Nisenan came.  This was their place.  They gathered here in the elder days to sing, to pray, to bathe, to gossip about the men.  To laugh. This was where they ground the acorns into flour.

The acorn harvest from the oak forests was the foundation of their sustenance.  Here on these rocks, the women, generation after generation of women, from grandmother to mother to daughter would sit in front of their hereditary grinding holes and make the food for their families.

Look around you.  The holes are everywhere.  I have personally counted more than thirty grinding holes.  I have read that there are many more.  I sit among the spirits of these Indian women, and smile at the joy they must have shared on these rocks.

Refreshed, I get dressed, take a breath and look upwards, 4.5 miles to the top.  I’m not going to take you back out on this narrative.  You’re on your own.  Just stay on the trail and mind your footing.  I’ll meet you back at the parking lot.