One year ago this month we were standing on the dock watching firefighting aircraft dip water out of the lake to drop on the fire that would be known as the 49er Fire.

Fighting this fire was urban warfare at its most vicious. The firefighters were clearing the flames, house to house, some saved, some destroyed. A couple of days after the battleground stopped smoking, I drove through to look at the remains of my friends’ home. Joe and Faye had a small ranch house on Creekside Way, the “heat center” of the fire. 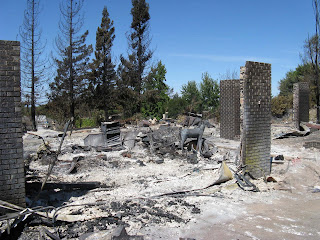 My own home in Los Gatos burned down in 1992, and we lost pretty much everything. It didn’t bother me much as I had been possession-less on three other occasions in my life. But there was a difference with these friends. Faye is an artist, a painter, and she lost it all, her life’s work, all of it. I am having trouble getting my mind around that. 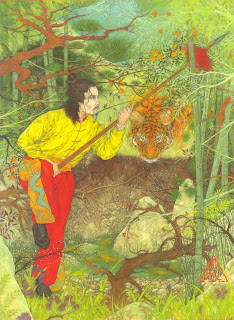 Today Joe came in to the office. He needed some info and wanted to say thanks because I had located a house full of furniture for him. (This is a side benefit of being a realtor; I know where everything is; sort of like being a supply sergeant in the Corps.) I hardly recognized Joe, so destroyed in spirit and emotion. He is so worried about Faye. Me, too. But I have a surprise for her. Last year I bought one of her large pieces. At the right time, I’m going to sneak into her house and install it on her wall. I’m thinking, it was just on loan, to keep it safe. You can bet I’m looking forward to that bit of sneakery.

Back to the fire. It started right on the edge of Highway 49 in Auburn and swept due north, propelled by strong winds from the south. Where did they come from, these winds? We haven’t had a breeze in weeks. Along this stretch of 49 are commercial buildings, a nursery, tire store, gas station, building supply store with a large lumber yard, things like that. To the east is the Auburn airport. The firefighters attacked along a battle line behind the commercial zone and saved most of those buildings, but the fire squeezed through and raced north into a residential area. 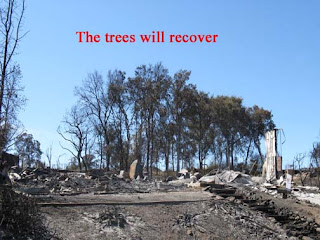 At the corner where Dry Creek road makes it’s sharp jog north, adjacent to 84 Lumber, the fighters established a salient, a defensive angle, to keep the fire pinned behind the road. They worked up behind the lumber yard to keep it a bay from all that fuel. 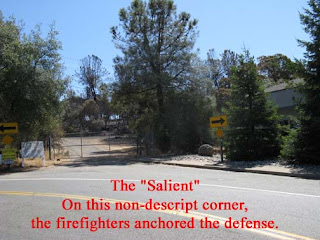 But the fire was channeled right into the Creekside Way neighborhood, a small subdivision of about 50 homes. Here’s where the real urban warfare was waged. Driving through the neighborhood, I could see the aftermath of dozens of distinct fire fights. One house saved, the next utterly destroyed. In many places I could see the exact FEBA (forward edge of the battle area in military parlance), a precise line of demarcation between devastation and salvation, sometimes a driveway, sometimes just a singed line in the lawn. 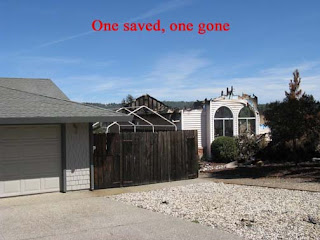 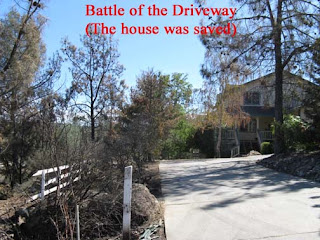 The main battle was along Dry Creek Road itself, after it makes it’s big turn back toward the east. On the south side, the Creekside inferno; on the northside, Saddleback subdivision and then, desert-dry woods, fields, grass and houses for miles and miles, all the way to my house. 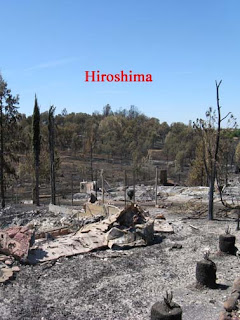 With the hard wind pushing the fire right at Dry Creek Road, the firefighters knew this was their only chance at containment. It had to be stopped right here. Those of us behind the line held by our guys were evacuated or preparing to evacuate.

What are we going to take? Who’s driving what vehicle? Where’s Mom? Does the ATM still work? How much gas? What if we get separated? What’s plan B? Did we pack dog food? What’s an alternate route if the fire gets to Higgins Corner before we do? Should I stay behind and try to defend the house with the hose?

But the line held. At one spot the fire jumped Dry Creek and burned about an acre. The fighters threw it back. Over and over the fire pushed against the defense. The line held. The fire wheeled east. The fighters chased it down an stopped it right at the edgs of home after home. At times they must have been literally pressed with their backs against a garage wall saving someone’s home. 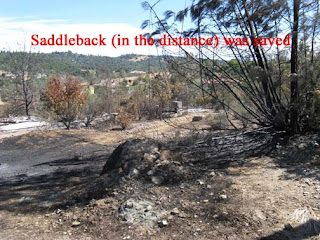 Folks, when you see those brave, skilled men and women out on the corner, fill up their fire boots with your cash. There may come a day when they pull your ass out of the fire, when all that stands between you and hell are your firefighters. Love ’em up.