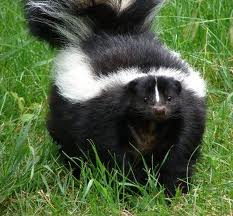 No, I don’t mean this is a recipe for cooking skunk!  This is the recipe for getting skunk spray off your dog–or yourself.  It would also work on a cat.  Ha!  I’d like to see you try to de-skunk a cat!

I’ve researched this basic recipe for “skunk juice” several times, and it is easy to find a recipe on-line, but I have a variation that has really worked well for me.

Before I tell you how to make it, here are three important cautions:

Adam and Jamie on Mythbusters tested the recipe against (1) commercial skunk removal concoctions and against (2) tomato juice.  They found the “recipe” to be 80-90% effective in neutralizing the smell.  The commercial stuff was less than 20% effective, and the tomato juice was completely “busted.”  It doesn’t work.

So here’s the formula Adam and Jamie used:

Years ago, some country folk gave me a similar formula that I have used many times, and it really works.  In addition to the above ingredients I use:

The sooner you can get this job done, the easier it will be.  Here are the steps:

3.  Wet the dog (for yappy, snappy little lap dogs you can use “tepid” water so as not to offend Fluffy’s tender sensibilities).

4.  Mix the ingredients in an open plastic bucket or other large open container right where you are working.  It will fizz like crazy.

5.  Quickly, use a large sponge or rags to soak the happy animal in the mixture.

6.  Do not get the stuff in the dog’s eyes.  This is hard to avoid, because most often pooch will catch the skunk’s spray right in her face.  Do your best.  There is some stuff in a tube you can get from the vet to put into her eyes before you start.  Unfortunately, pooch typically gets sprayed sometime after midnight when the skunks are open for business and the vet is closed.

7.  The stuff only has to stay on the dog for a few minutes.  It works by chemically changinging the skunk oil and then fizzing it away.  That’s why it’s necessary to mix up the recipe immediately before you put it on the dog.  Put it on “fizzy.”

8.  Then you rinse her off, or at our house, let her go swimming in the lake.  Keep her outside.  She’s going to roll, and better on the grass than on your carpet.  Capiche?

Finally, a couple of reminders.  Remember when I said the stuff was explosive?  That’s not a joke.  Don’t ever put it in a closed container, and do not store any left-over juice.  Some people advise you to wear rubber gloves and goggles (for when pooch shakes this stuff all over you).  That sounds like good advice.  I usually perform the de-skunking it in my underwear or an old bathing suit and then throw the wretched garment away. 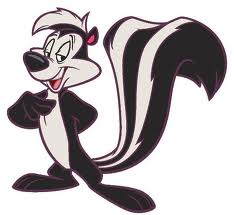