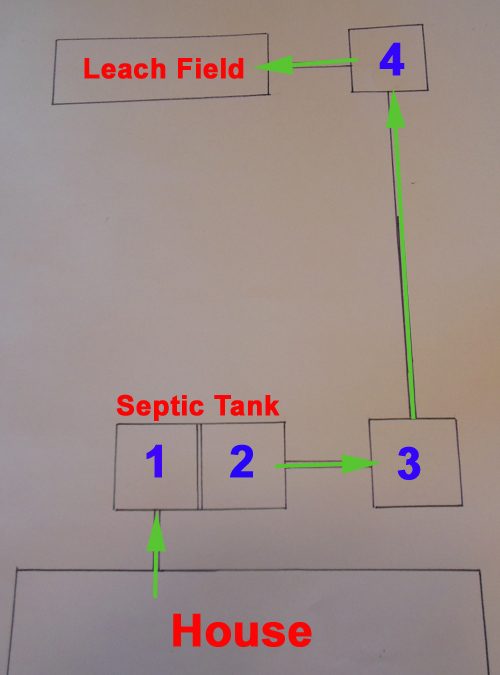 Pump Up Septic Systems.
Yes, here’s another poo blog.  But this one has dramatic twists.  It’s a four-chamber septic system that pumps the poo uphill . . . and it’s broken.  Yay!  Conflict.  Suspense.  Heroes!
Here’s a sketch of how the pump up system works.

The first two chambers of the system comprise a standard two-chamber 1500 gallon concrete septic tank buried in the ground.  Let’s look down into the first chamber, the one closest to the house where the “solids” are “processed” and separated from the liquids.  “Processing” means that ecstatic  little bacteria eat the stuff that flows downhill into the tank from your toilet.  But the bacteria have to poo also, don’t they?  I know you are dying to know where all the bacteria poo goes.  It can’t just disappear.  There’s some law about the “conservation of mass” or something like that.  The clever bacteria just transform people poo into bacteria poo in the form of gas.  Farts.  Where does the gas go?  Have you ever noticed those vent pipes that stick up out of the roof of your house.  If you put your nose to one and inhale deeply, guess what you’re gonna whiff?  Farts.  Bacteria farts.
But I digress.
We were looking down into the first chamber, the solid processing chamber, the icky one.

What are we going to do?  We’ll take our trusty Crust Buster (don’t you love that name?) and start hacking away at the root mass from the top.  But, guess what?  Somebody is actually going to squeeze down in there and cut it away by hand.  Who?  Me?  No way.  You?  I didn’t think so.  One of the septic guys.  Our hero.  Do you think he is going to charge you a bunch of extra money for this inexpressibly filthy job?  I would.
OK, sometime later, a thoroughly pissed-off septic guy crawls back out of the hole.  On to the second chamber!  Ta Da!

This is the liquids chamber, the second chamber, that is separated from the (now “clean”) first chamber by a baffle.  The separated liquids flow under the baffle into the second chamber.  At today’s inspection, this second chamber is fine.  Whew!
(That white pipe in the photo is the business end of the vacuum hose that the  technicians use to suck all the “juice” up from the tank and into the tanker truck.)
When these liquids, aptly called “grey water, reach the near-top of this second chamber, they flow out of a pipe, downhill, into the leach field.
Usually.
Except, on this property, the only suitable place to locate the leach field is several hundred feet away from the house . . . uphill.  So the grey waters flow downhill just a few feet away into a third chamber, the pump up chamber.

Here, in the pump up chamber, the grey water rises until it triggers a motor that pumps the fluids uphill.  This chamber, and the pumping mechanism of floats and motor, is in good shape.  Whew, again.
Now, cross your fingers that the fourth chamber is OK.

At first glance, this chamber seems fine.  We septic gurus don’t call this a “chamber.”  It’s a distribution box or “D box.”  The grey water comes in on one side and flows out a pipe on the other side, downhill,  into the leach field.  Simple.  Like I said, the D box looks OK.  But there is a crucial test to perform.  We are going to take a garden hose and pump a lot of water up into the D box and out into the leach field to make sure that the leach field can accept a large amount of fluid without backing up. We’ll insert the hose into the outlet “T” of the second chamber.

If the leach field can not accept the required infusion . . . we have trouble, potentially big trouble.

Uh oh!  The water is flooding the D-box and flowing out onto the ground . . . not into the leach field.  Sewage is flowing out onto the ground.  Yuck.  Either the leach lines are blocked or broken . . . or the leach field itself is saturated or otherwise unable to take the effluent.  In the first case, damaged leach lines, we may be able to inexpensively repair them for hundreds of dollars.  But if the leach field itself has failed . . . we are looking at thousands of dollars, perhaps many thousands of dollars,. You read that right.  Thousands.
Or what? Or eventually have your house condemned and your certificate of occupancy revoked by the county.  You simply can not pour sewage out on the ground.
But this is the topic for another exciting blog “When Leach Fields Fail!”
Our story today has a happier ending.  The excellent septic company, consulting with the county engineer, identified broken and blocked leach lines and . . . repaired the system for only hundreds of dollars.
And because they did such a good job for my clients, I’m going to give them a plug right here.  Urke Septic out of Grass Valley, California.  They’re the best.
Call them at 530-274-3902.
Septic system repaired and certified by Urke . . . let’s sell this country home!