“No one plants great trees any more.”

You probably know Michael Pollan’s better-known works, The Omnivore’s Dilemma, The Botany of Desire, and In Defense of Food, but the less-regarded Second Nature is my personal favorite.  It’s a collection of essays, uneven in quality, and of no discernible organization.  Pollan rambles hither and yon about diverse “natural” topics, from weeds to lawns, roses to compost, seed catalogs to garden pests.  One of his most profound essays is called “Planting a Tree.”

Here are a few of my favorite passages from that essay. I have taken liberties in updating and shortening a few passages

For some time now, I’ve been thinking about planting a tree, a great tree.  It’s not that I haven’t planted trees before, but all of these have been minor trees, the kind you can justify in the short term:  white pine to screen the road, dwarf fruit trees, a crab apple or two, and a pair of Salix babylonica, the Tree of Immediate Gratification, otherwise known as the weeping willow.

A single great tree can make a kind of garden, an entirely new place on the land, and in my mind I was already visiting that place, resting in the shade.  I knew it wouldn’t happen overnight, probably not even in my lifetime, but wasn’t that precisely the point?  To embark on a project that would outlast me, to plant a tree whose crown would never shade me, or my children or, more likely the children of strangers.

Great tree planting is always a utopian enterprise, it seems to me, a wager on a future the planter doesn’t expect to witness.

No one plants great trees any more.

Who today can imagine a summer day in the next century, sitting in the shade of a maple planted in 2012?

I can’t help thinking some cultural pathology must be at work, some failure of imagination as regards the future.

To plant great trees is to give body and life to one’s dreams of a better world . . . a high-minded desire to make a positive statement about the future.

Choosing the site and digging the hole are crucial, irrevocable acts that, handled badly, you will rue for decades.

It’s a sobering responsibility, picking the site for a great tree.  Get it wrong, plant it too close to the house or an electrical line, and you will someday force a terrible decision on someone.

To plant a great tree is to throw a long shadow across the future of a place.

Digging the hole, another solemn responsibility.  The quality of the hole will determine the future well-being of your tree.

Better to put a fifty-cent tree in a five-dollar hole than a five dollar tree in a fifty cent hole.

Wendell Berry says that trees on a farm are a sign of the farmer’s “long-term intentions toward the place.”

” . . . splendidly broad-shouldered, ancient, generous, free, vast, venerable trees . . . have had a great influence on Toryism in England.  I think they preserve the aristocratic instincts, the historical sense.  Conservatism, tarrifs, golf, the House of Lords, and other odd and antique things.  I should probably be a rabid radical if I lived in the Street of Iron Balconies or in the Street of Grey bricks, but sitting under an ancient oak in the park at Hampton Court I was seriously tempted to acknowledge the value of old things, the high mission of old trees, the harmonious comprehensiveness of tradition, and the legitimacy of esteem for everything that is strong enough to preserve itself for the ages.”

These are but scattered fragments of Pollan’s wise and and funny essay on planting great trees.  Once again, his book is titled Second Nature. 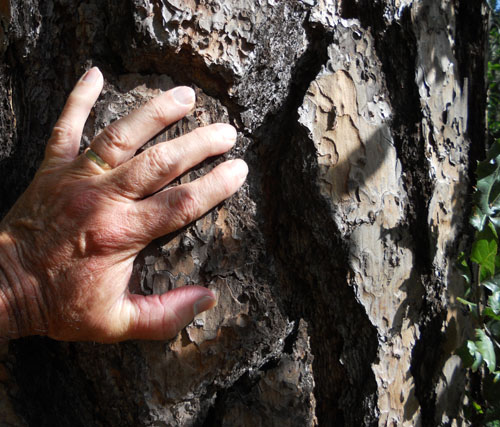