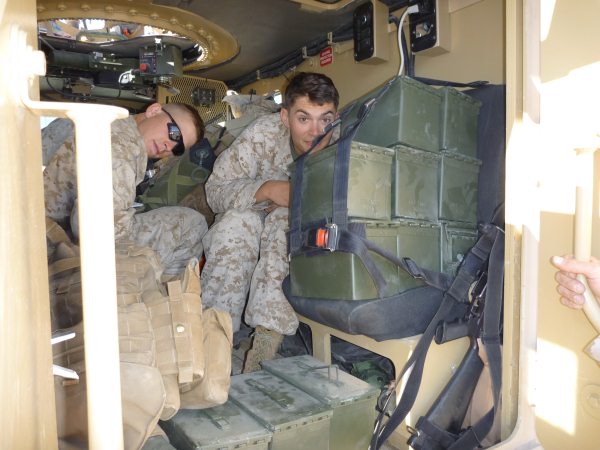 Corporal Robert “Luke” Jenkins, USMC, is the Alpha Company war correspondent for his unit currently deployed somewhere in southern Afghanistan.  These are his letters to the families of his fellow Marines.  Luke is our son.

The lives of the Marines of alpha company have been in constant change.  The nature of the combat engineer MOS with its myriad of skill sets and comparatively different talents from the Marines’ civilian occupations have proven to be advantageous to our mission of general support.  “Semper Gumby (always flexible),” is the prevailing state of mind.  The engineers have spent their time on a number of on base improvement and a few excursions out to the more remote operating bases.  A decent amount of vertical construction and concrete have been the staple, but a few Marines have lent a hand to the Air Force building hangers in the spirit of interservice cooperation.

Decentralization is the state of affairs for Alpha Company of late.  It has not found itself altogether since Mojave Viper.  Spread to winds, this is the only way to effectively provide the Marines on hand to handle the improvements necessary for sustaining ongoing operations in southern Afghanistan.

Living conditions are largely dependent to where a Marine happens to drop his pack on a given day.  It could be anywhere from two man rooms with air conditioning to a 12 man tent crammed in the corner of a Forward Operating Base (FOB).  Despite these widely divergent standards of living the Marines have stayed positive and are constantly forward-looking to the next assignment, sometimes to the consternation of the company staff.

The coin of the realm is squad sized elements (10 to 15 Marines) parceled out to different location around Helmand Province.  Split between Camp Dwyer and Camp Leatherneck, the squads are stretched across 50 miles of Afghan desert in order to supply much needed support to as many units as possible.  There are also several Marines from each platoon tasked out to camp guard and newly formed security platoons.  Camp guard is commonly referred to as “camp tax.”  It takes untold man hours and a plethora of unseen and unappreciated details to run what is essentially a small city.  Every unit enjoying the luxury of on base living must provide a few Marines to assist in the day to day operations.

The security platoons were introduced just as Alpha Company replaced Charlie Company, the prior engineers for this area of operation.  Made up of Marines from every conceivable corner of every platoon in the battalion,  the intent was to create a cohesive unit capable of providing competent security for the Marines en route to the various FOBs.

In summation, the Marines of Alpha Company are busy fulfilling their small part of the overall effort with pride.  Families and friends have been unflagging in their support, sending a seemingly endless stream of care packages and mail.  Home is never far from the thoughts of these Marines and rest assured that your efforts are not taken for granted.

Thank you for your love and kindness.