Auburn, California celebrates the 4th of July with two evenings of American music.  The free concerts are called Homeland and feature the Gift of the Heart Orchestra and the Placer Pops Chorale.  Both ensembles are surprisingly adept.

The programs are given at the Auburn Library Garden Theatre, a large outdoor amphitheatre just off Nevada Street at the corner of Fulweiler.

On the evening CJ and I attended there were several hundred people sitting on blankets or folding chairs. 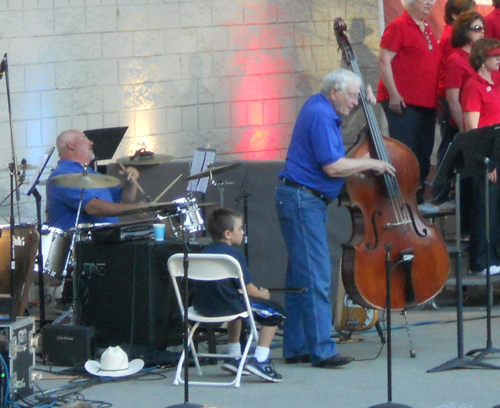 My favorite musician was the elder statesman on the upright bass.  He was ably assisted by a young lad who turned the pages of grandpa’s sheet music.

The first half of the concert featured big band numbers from Count Basie, Glenn Miller, John Williams and others.  The second half, as you might suspect, was patriotic music.  My favorite number was a tribute to the 5 armed forces (Army, Marines, Coast Guard, Navy, and Air Force)with a verse from each of the service hymns.  As the songs from different branches were played, veterans from that branch were asked to stand and be recognized.  We half dozen old Leathernecks stood at attention as the notes from the famous Marine Corps Hymn were sounded.  I believe we got the loudest round of applause.  Veterans from other branches probably felt the same way about their ovations.