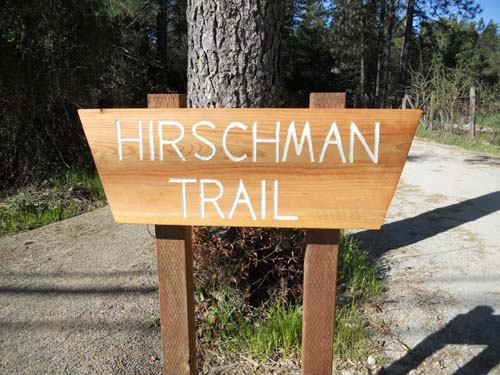 There’s a detailed map at the trail head.

The first third of a mile is wheelchair accesible.

The topography has both wetlands and rocky terrain.

Coincidentally, I went for this run on the same day, and at the same time, the trail was officially dedicated  (and, no, that’s not Dharma, my loyal running pooch.)

At the .4 mile mark, the trail will open up for a view of the pretty Hirschman Pond.

Here’s something you should know about the pond: it is largely man-made, or miner-made to be precise.  Look those bare earth cliffs on the other side.

And how was it “miner-made?”  I bet you already know.  With one of these, on display at the far end of the pond.

Yep.  That’s a water canon used in hydraulic mining.  Vast areas of the Sierra foothills are still scarred and pock-marked by the deployment of hydraulic mining “artillery.”  Here’s a comforting footnote.  In 30+ years exploring these hills, I have noticed how Ma Nature has already restored much of the damage.  Jagged edges have been softened, vast expanses of raw earth have been covered by vegetation.  In another hundred years there won’t be much evidence that mining ever took place.  OK, maybe it will take a thousand years, or ten thousand years, or one million years.  Ma Nature has plenty of time.  One Million years?  A blink of her eye.  Where will WE be in a million years?  Hmmmm?

OK, where was I?  Oh yes, on the Hirschman Trail, running and ruminating about philosophy and the environment and such.

You can’t get lost on the Hirschman Trail . . . except one place.  Even then, you won’t be lost for long, because when you take the wrong turn, you’ll discover that the trail gets smaller and smaller, steeper and steeper, and the blackberry brambles begin to tear you up.  I don’t want that to happen!  You seem like such a nice reader to have gotten this far, so lets make sure you take the correct turn.  When you get to the end of Hirschman Pond, you will cross a little bridge.  You can go right (toward the thorns) or you can go left (toward more fun and illumination).  See the photo below.  Go left.

From the bridge  to the end of the trail, it is exactly 2 miles, and there is no way to get lost because the trail is well-marked, every 1/10 of a mile in fact.

The trail itself is well-built, but not especially scenic.  You could call it “pleasant” or “relaxed.”  A bit of up and down, but no “wow” factor.  In several places it veers to within 20 feet of Highway 49, just in case you need to thumb a ride, or perhaps you like listening to road noise as you run through the forest primeval.

That last remark was a little snippy, wasn’t it?  Sorry.

So, you run along for about a mile until you come to the turn off to Woods Ravine Trail.

Woods Ravine Trail is a nondescript spur off the main trail.  It is a .2 mile out-and-back, so you can add another .4 to your outing for a total of 5.2 miles.

If you go all the way to the end of Woods Ravine Trail, you will emerge on to Indian Trail Road.

Go right on Indian Trail Road, one block later, go right again on to Indian Flat Road, run a couple of steep, uphill miles to Cement Hill Road, go right again for about 150 yards and, abracdabra, you are back at your car!  Or, turn around when you get to Indian Trail Road, run back down Woods Ravine Trail, get back on the Hirschman Trail, and finish your business properly.

Watch out for poison oak.

Here is California’s most ubiquitous shrub, manifested in this photo as a vine.  Mostly it takes form as a bush, the kind you might find yourself in the middle of, naked, stark naked, trying to hide as a bus load of Japanese tourists hike by with their cameras and their giggles, then you look down at yourself and say curse words because you are screwed, totally screwed unless you know a witch, a real witch, the kind of witch who lives up on the San Juan Ridge, and who can provide you with a home-brewed potion that will make the poison oak vamoose.  Don’t know a real foothills witch?  Oh man, like I said, you are totally screwed.

Actually, I have a working relationship with poison oak.  I leave it alone, and it leaves me alone.  No so with scotch broom.  I rip that stuff up whenever I can.

Scotch broom.  Do not plant this stuff.  Do not think it’s pretty.  Do not buy it.  Do not put it in your yard.  It is a self-seeding menace, the most dangerous, invasive horror in the foothills.  I have friends who have been waging war against scotch broom for years.  They are losing.  Scotch broom is northern California’s version of kudzu, the vine that is eating the southern United States.

After a while you will come out of the scotch broom and onto a series of brief, but steep-ish switchbacks.

At the top of the switchbacks you will see one of the unobtrusive mileage markers.

Or, you can turn your outing into a loop by leaving the trail and returning by either Indian Flat or Indian Trail which eventually intersects Indian Flat.  It’s a pretty country road, though quite steep  toward the end.  If you take the looping road back, the trip is a bit longer, right at 6 miles I’d estimate.

But for today’s  run on the Hirschman,  I decided to come back along the trail.  Just loping along, the return took 28 minutes and 30 seconds, a laggard’s pace of  11.9 miles per hour, but it’s more uphill on the return, and quite twisty, and the day was already hot.  Blah blah blah.  I need to lose some weight.  You, too?