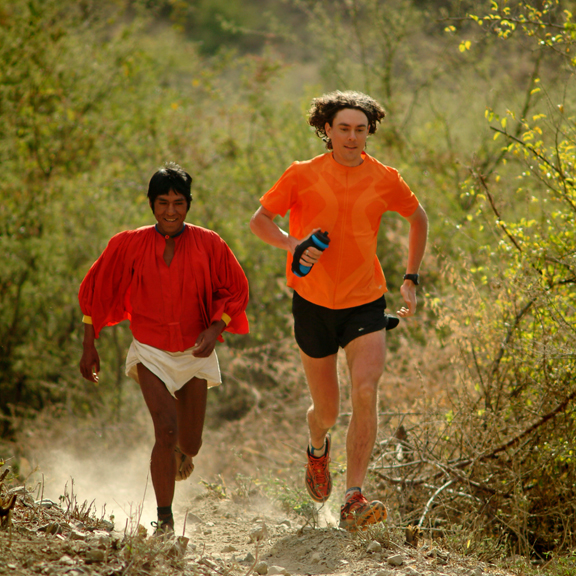 I’ve never run with the Tarahumara. I don’t think I’ve ever seen a living Tarahumara, but you never know.  As they say, “Indians are everywhere.” But I’d sure like to run with these people, the greatest ultra-distance runners on the earth, not that I’d last very long, because, for the best of them, hundred mile lopes through rugged mountains are casual day trips.

The Tarahumara live in the Copper Canyon wilderness of Northern Mexico. They are a reserved people who stay just about as far away from Western Civilization as they can manage. From early childhood they run. Boys, girls, men, women, they all run astonishing distances seemingly without training, preparation, special diets, or expensive equipment. They rarely run outside of their homeland, and they don’t seek records, fame, or money. They run for the love of running.

The running prowess of these Indians popped up in my awareness from time to time as a kind of mildly interesting trivia, but I didn’t take a hard look at them until I read Chris MacDougall’s best seller Born To Run. The central character in his book is an American known among the Tarahumara as Caballo Blanco, the White Horse, formerly known as Micah True.

Caballo Blanco, who has lived among the Tarahumara, gave the author, Chris MacDougall lessons in running the Indian way. One of those lessons stuck in me like a burr, and I’ve been working with it recently.

Here’s the quote from Born To Run:

“Think Easy, Light, Smooth, and Fast. You start with easy, because if that’s all you get, that’s not so bad. Then work on light. Make it effortless, like you don’t give a shit how high the hill is or how far you’ve got to go.”

You don’t give a shit how high is the hill or how far you’ve got to go.

You don’t care how far you’ve already run or how tired you are.

You don’t care about your pains or your shoes.

You don’t care about your run tomorrow or if you’ll ever run again.

I’m talking here about the ancient practice of letting go of worry, of detachment from the responsibility to worry about stuff. Letting those concerns just slip and fall away while you run.

You run down the trail through the forest, along the canyon wall, along the seashore or the river. You start up a long uphill climb. You say to yourself, “I don’t care how high is this hill or how long it’s going to take to run up it.” If you need to, you say it again, you say it again. Soon, you believe it. Soon you really don’t care. You. Don’t. Care.

I’m a beginner at this Tarahumara way of running. My success at running “light” is sporadic, and I find myself slipping back into “worry,” but the trance-like periods of lightness are coming easier, coming sooner and lasting longer.

Thirty years of dedicated running, much of it goal-oriented. Races, paces, mileage, trail mastery, that sort of thing. I’ve run a bit over 23,000 miles toward a goal of running 25,000 miles, the circumference of the earth, by the time I’m 65 years old, so I’ve got about two and a half years to lay down those 2Gs.

I suppose I’ll carry on with that project, but I have a new idea, a Tarahumara idea. After I achieve that 25,000 mile goal, I’m going to take off my watch and never wear it again while I run. I’m going to stop recording my mileage. I’m going to see if immersing myself in the Tarahumara way can take me to higher and higher levels of awareness. That should be interesting, don’t you think?