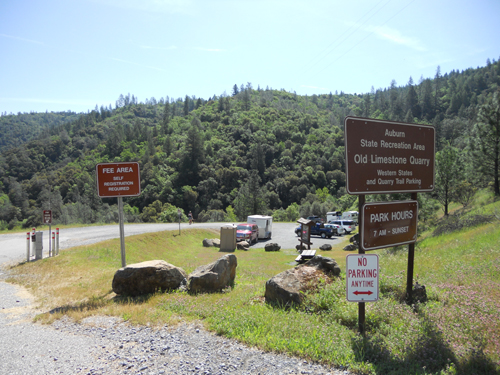 The 7 mile long Quarry Trail is just below Auburn, California, at the Confluence of the Middle and North Forks of the American River.  A true “loop trail,” it begins and ends at the same place along Highway 49 between Auburn and Cool.  What a name for a California  foothill town!  Cool.  Cool, California.  Quarry is a fun trail to run and quite scenic, especially toward the end, but you can get lost, or take several grueling detours, unless someone scouts it for you.  That’s why I’m going to expend some effort in giving you directions, including that all-important first direction:  how to find the trail head so you can get started.

Driving down 49 from Auburn,  you reach the bottom of the American River Canyon, turn right across a bridge, and begin the climb up toward Cool.  In less than a mile you will see a sign on your left at the entrance to car park.

I don’t park here.  It costs ten bucks.  Forget that.  Pull in and turn around (very carefully) and go back down hill a hundred yards or so, and you will see very wide shoulders along the highway.  That’s where I park. Free. 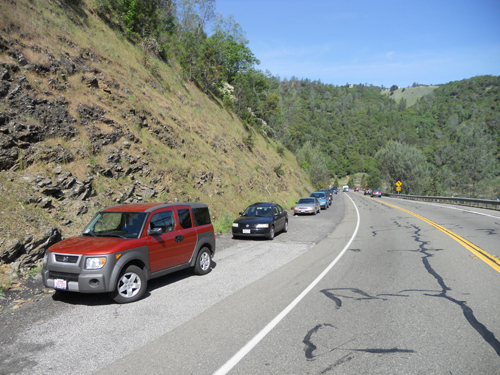 Take a deep breath and look around.  You can see the American River and the beautiful Foresthill Bridge that crosses it. 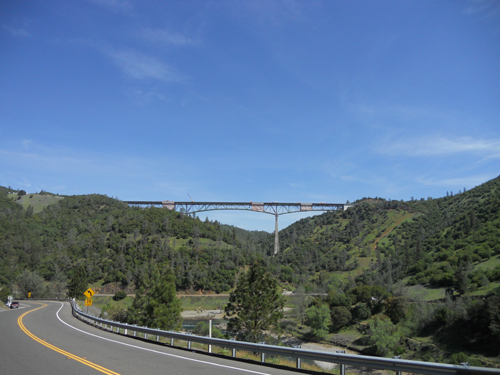 Now walk back up the highway.  Directly across from the entrance to the car park you will see a little spur trail running diagonally uphill.  Walk up that spur. 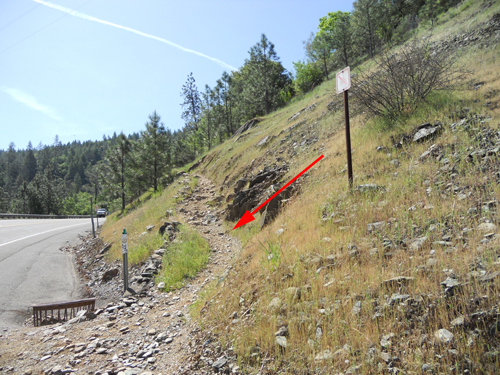 At the top you will find a convenient sign.  This is the trailhead for the Quarry Trail, at least the way I run it.  Stretch out here in the shade.  OK?  Let’s get to it! 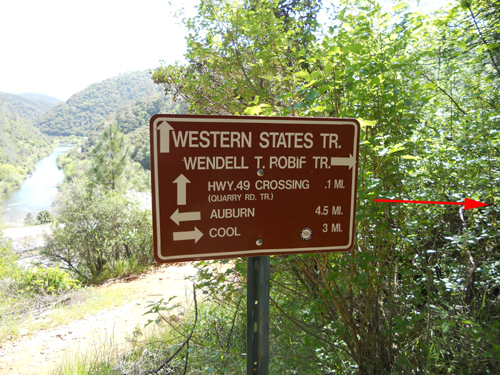 Quarry Trail is one of my “challenge trails.”  The running “difficulty level” is high, not extreme, but it will get your attention, especially the first half hour which is all uphill, not steep, but relentless. 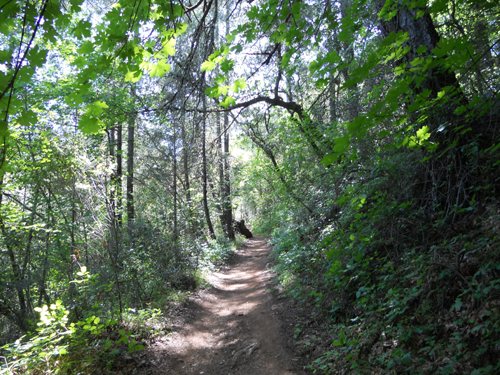 Pretty, isn’t it.  This is typical of the lower trail.  During the first mile or two, you will cross two small creeks. You will see a sign inviting you on a side excursion up the Pig Farm Trail.  Don’t be tempted.  You have been warned.  The sign says “steep.”  That is trail runner code for YOU. WILL. DIE. 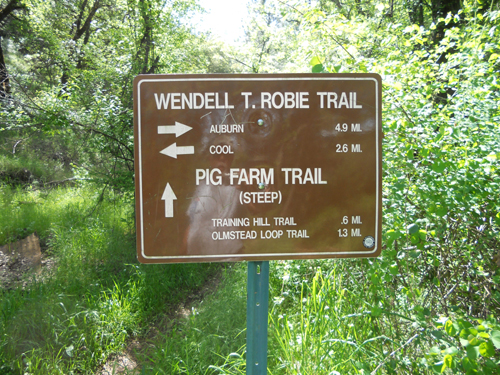 At this time of year, sunny stretches of the trail are lined with wild flowers.  AhhhhhhhCHOOOOO! 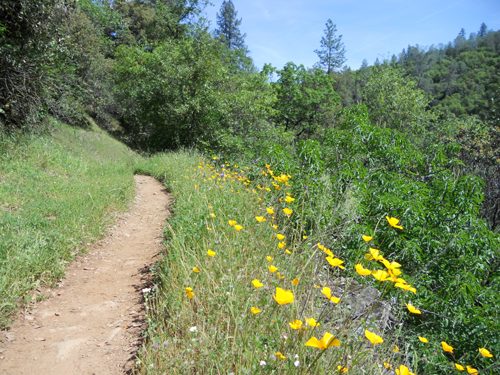 Run run run run.  Up up up up.  Be observant and by and by you will spot a sign on your left that promises you a short cut.  Take it.  By the way, “short cut” is trail runner code for “steep.” This is a typical section of the Short Cut Trail . Looks a bit wilder, doesn’t it?  Yes, and also less churned up by horses. 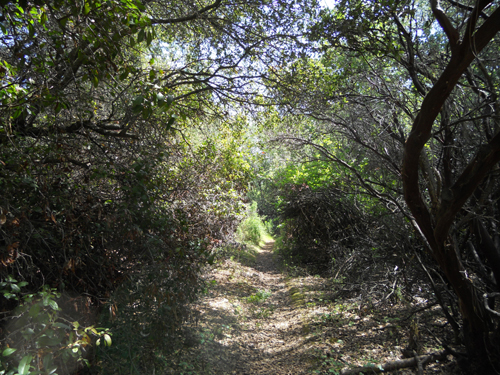 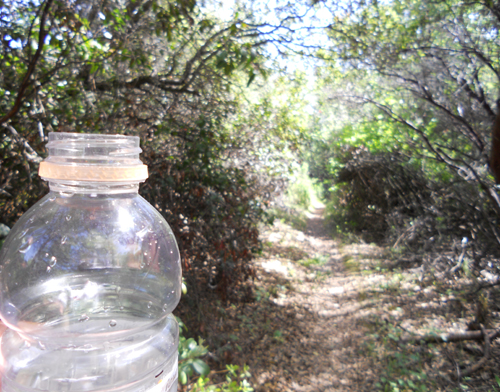 Water bottle?  Yep, I am reminding you to take a drink of water when you get to the top of the Short Cut.  The top is  an otherwise nondescript section of the trail, but you will be glad to get there.  Guess what?  Your uphill work is done!  Now, run run run run.  Down down down down.  In less than a mile, the Short Cut trail will end.  If you go right, you will connect with the Olmstead Loop trail.  Don’t do that.  Olmstead is another adventure altogether.  Go left, toward Highway 49.  Be quiet and listen.  You can hear the traffic. On this day, just before I got back to the highway, I spotted a couple of other runners in the meadow ahead. Cross Highway 49, also known as the Cool-to-Auburn Grand Prix.  Be careful.  The drivers along this curvy, downhill stretch of 49 all think they are race car professionals. Go through that gate where I have placed the red arrow and continue through the Quarry parking lot to pick up the trail on the other side.  It’s well marked. 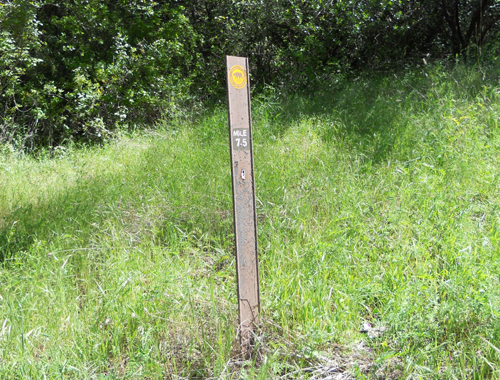 Run run run.  Down down down.  You won’t get more than a peek of the Quarry, but you can hear the massive machines during this section of trail.  By and by, the trail will appear to end on a small gravel road. Now, pay attention.  Here is the place where it is easy to take the wrong turn.  Still running downhill, you will come to a very obvious fork.  Continue downhill, to the left,  as indicated in the photo below.  If you go uphill, toward the right, you will eventually come to Lake Tahoe . . . in about 92 miles. Toward the bottom, you will begin to hear the Middle Fork of the American River.  You will also see lots of the much-despised scotch broom. Soon the trail will end at the dirt road that parallels the river.  Make a hairpin turn back to the left and run along the road.  You will cross another little creek, it typically runs all season, by the way. You are on the “civilized” final stretch of the loop.  The Middle Fork will rarely be out of sight, and never out of hearing.  You may have to share the trail with other birds of a feather. There’s a turn off that goes up to the old quarry, now mostly reclaimed by Ma Nature and known as Cougar Canyon.  It’s called that because . . . well . . . mountain lions live there, one ancient lion, to be more precise, a scarred and unpleasant old warrior with a broken jaw and one fang that  juts out crazily from his lower lip.  Not surprisingly, he is called Snaggletooth.  Cougar Canyon is a beautiful and interesting side trip for another day.  Just be careful up there.  Keep your eyes open and stay alert.  By the way, I made up that stuff about Snaggletooth.  My little joke.  Just to see if you were paying attention. You will see the ruins of the old bridge that crossed the river and connected to the Foresthill Road. There’s an assortment of rusty artifacts if that kind of thing turns you on. Keep your eyes peeled and looking to the left as you reach the ruins.  You’ll spot the entrance to the Hawver Cave. I’ve never been inside, but I’d like to take a look some day.  They discovered lots of fossils of North American mega-fauna in there:  dire wolves, giant sloths, mastodons an so on, as well as Native American artifacts.  It’s kinda dark and spooky. The final stretch is about a mile long.  It’s paved and right next to the Middle Fork.  You could take a thousand fabulous photographs during this last lap, but I’ll just give you this one,  typical and representative. It is beautiful, and looks peaceful, but be very careful.  This river  killed a lot of people who underestimated it’s power, speed, and frigid temperature.  In fact, stay out of the river unless you know it well.  I have rafted on the Class 4 rapids further upstream, and I have great respect for the dangers of the Middle Fork.

I hope you enjoyed your outing on the Quarry Trail.  See you on our next run through the Sierra Foothills!