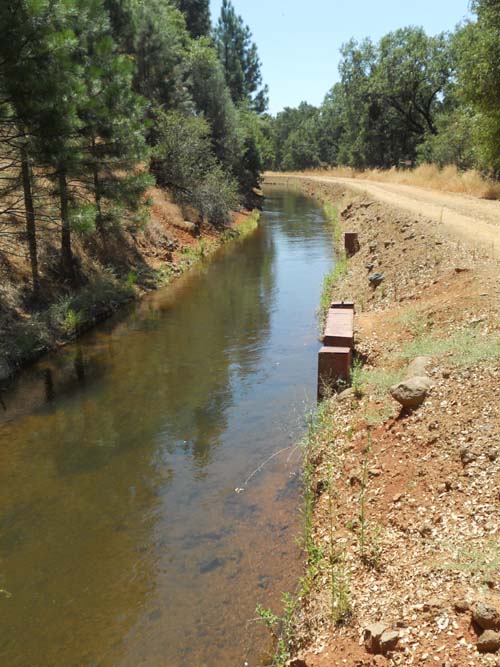 Irrigation water in the Sierra Foothills is not immune to the politics of  California Water Wars.  Water is a precious commodity and transporting water is expensive, especially to the thirsty throats of the southern California cities and central valley agribusiness.

Up here in the Sierra Foothills, water appears plentiful and ubiquitous.  It seems like there are NID (Nevada Irrigation District) canals everywhere.  But looks are deceiving.  Just because a NID canal runs smack dab through the middle of your property, you are not entitled to that water, even if you are willing to pay for it.  You can apply for an irrigation allocation, but that doesn’t mean you’re going to get it.  There is, in fact, a moratorium on new allocations throughout most of the district.  That moratorium is expected to last at least another two years.

Here’s the good news:  if you buy a piece of land with an existing NID allocation, that allocation will run appurtenant with the title—assuming all the bills are paid and the application for change of owner is filed in a timely fashion.

Let’s assume that you do have an allocation of irrigation water from a NID canal, also known as “ditch water.”  How does the water get to your field, garden, holding tank, or pond?  If the canal is uphill from your property, it’s almost as simple as sticking a hose in the canal and letting gravity take care of pulling the water downhill to you.  If the canal or ditch is downhill, you’re going to have to pump it up.  You knew that, didn’t you?

OK, the canal is uphill.  If it’s on your property or along your boundary, no sweat.  If it’s some distance away, you will have to secure (buy) one or more easements across your neighbor’s land.  Don’t be intimidated; it’s done all the time out here in the boondocks.  We hillbillies actually try to help each other out most of the time.  Imagine that.

The first thing NID will do is install a service box.  Here’s a photo.

The service box has a screened opening facing the ditch.

Water comes through that screen into the front chamber of the service box where it is stopped by a metal plate or baffle.  There is a hole in the bottom end of that baffle.

One miners inch opening in the baffle

You get however much water can go through that hole, under pressure, and into the second chamber.  From that second chamber, you hook up your own pipe and let gravity take it away to your property.

Let’s take a minute to reflect on that hole at the bottom of the baffle.  If it is one square inch in size, then you get “one miner’s inch” of water.  If it’s a two square inch hole, then you get “two miner’s inches” of water.  The baffle is removable, so NID can increase or decrease the allocation by changing the baffle to one with a different sized hole.  Simple and elegant, isn’t it?  Or NID can take out the baffle, turn it upside down, so that the hole is at the top of the baffle and above the water line, and cut off the supply of water completely!

And that’s exactly what NID does at the end of the irrigation season.  Notice in the above photo that there is a lock on the lid of the service box.  On November 14 or thereabouts, every year, NID comes along, unlocks the box, performs any necessary repairs, turns the baffle upside down cutting off the supply, and re-locks the box.  Five months later, on tax day, April 15 of every year, NID comes back, unlocks, repairs, turns the baffle hole-side down, and the irrigation season begins again.

How much does it cost for, say “one miner’s inch” of NID ditch water?  We’ll get to that in the next exciting installment of Ditch Water!