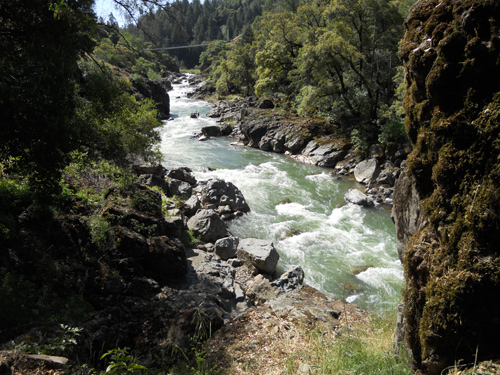 There’s a secret trail near my home at Lake of the Pines, California.  Dharma and I run there often because it’s shady, not too difficult, and not too long, out and back, to a secret location about which, if you are an attentive and patient reader, I shall tell you in a moment.  I stumbled upon this “secret” trail a few years ago, by accident.  Well, to tell the truth, it wasn’t exactly “by accident,” and “stumbled” is not the most accurate word.  In fact, I “climbed” a couple of fences and ventured on to somebody else’s land.  Yes, I admit it.  Outlaw and trespasser am I.

But no more!  I have since “earned” the owner’s permission to run on this trail whenever I want.  It happened this way:

One day when Dharma and I were  running on the still-illicit trail, an old yellow dog began to follow us.  He appeard to be a farm dog, and he seemed to know the land very well.  Dharma sniffed him, pronounced him acceptable, so the three of us ambled along together until the old fellow began to tire and fall back.  A while later, he re-appeared ahead of us.  Obviously he knew a short cut.  It went on like this, mile after mile.  He would fall behind, then pop up on the trail ahead. Eventually, though, he seemed to have vanished for good, and I decided we had left him behind.

When Dharma and I finally emerged from the woods and on to the paved neighborhood streets, I looked back one more time.  Yep, there he was, plodding along.  I realized we might have led him miles from home.  He could be lost.  What to do?

I put both pooches in the back of the truck, noticing, as I picked up the elder gentleman, that he was wearing a collar and a tag.  There was a phone number on the tag.  I called the number and a man answered, quite relieved when I told him I had his dog.  We arranged to meet at the local Starbucks.

The dog’s owner arrived and there was a joyful reunion between man and mutt.  The owner expressed his gratitude with a bag of freshly picked vegetables from his garden, tomatoes, squash, and cucumbers.  He introduced himself as the owner of the enormous parcel of land on which we had been traipsing.

He said, “I want you to feel free to run on my land any time you want.  I’ve got 17 miles of trails out there, and you are welcome to all of them.”

That’s how I became an honest runner of the secret trail.  Moral of the story?  Take care of lost dogs.  Aaaaaroooooooooooooooooo!

But what does this have to do with Buddha?  And coming home?

At the very end of one of the secret trail spurs, there is a clearing, perched among the rocks, where you can look both up and down the Bear River. 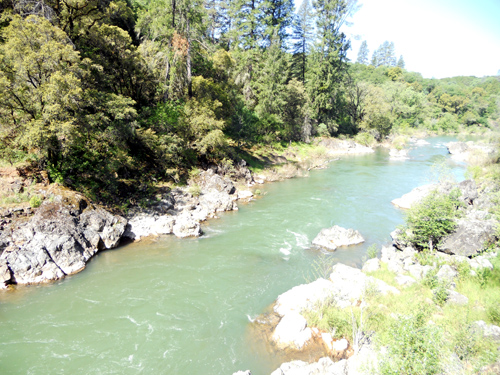 That’s a big hint as to the general location, but you still won’t find it without my help. 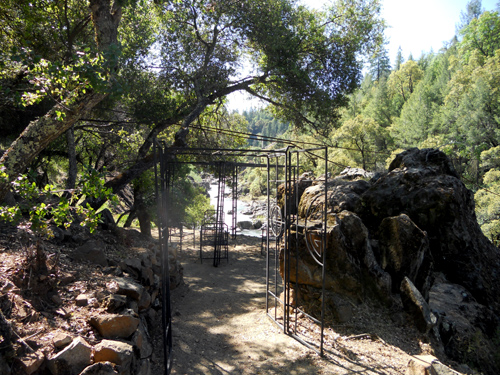 The clearning is well-kept, with chairs and benches, and is, in all ways, delightful.

The focal point of this spot is Buddha.  Reposed upon a bench, Buddha sits in blissful meditation.

You can imagine my surprise the first time I ran into the clearing, my mind darting this way and that, and then . . .  there he was.  Silence.  Peace.  I came to a dead stop.  With my palms pressed together, I gave the Buddha a high wai and began to chant the sacred mantra.

Many times after that, I would run down the trail, now named by me The Buddha Trail, to meditate, chant,  and hang out with the Enlightened One.

I ran into the clearing and Buddha was gone!  Someone had stolen the Buddha!

As months passed I continued to visit the spot, but it wasn’t the same.   Now, don’t sermonize.  I know, just as well as you, farang, that Buddha Mind does not rely upon a statue.  The Awareness is just as available to me in the woods, the river, and even in my thoughts about the woods and the river.  But, doggone it, I missed my Buddha!   Waaaaaaaaaaaaaaaaaa!

A couple of months ago we (Dharma and I) burst into the clearing . . . and there he was! 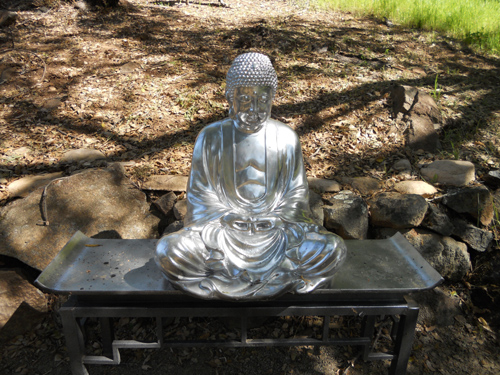 Not only was Buddha home where he belonged, but he was sporting a fancy sliver paint job.  I was so happy to see him.  I chanted, prayed, meditated.  Even Dharma entered a state of samadhi.  Possibly I am anthropomorphizing just a bit, but she sure seemed happy. 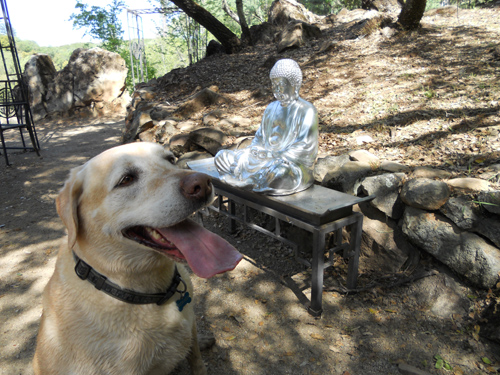 If only I had a welcome home gift!  Well, next time, I’ll bring some little offering.

We took our leave of Buddha and headed home.  We had not run a hundred yards when I spotted, in the middle of the trail just ahead, the perfect gift. 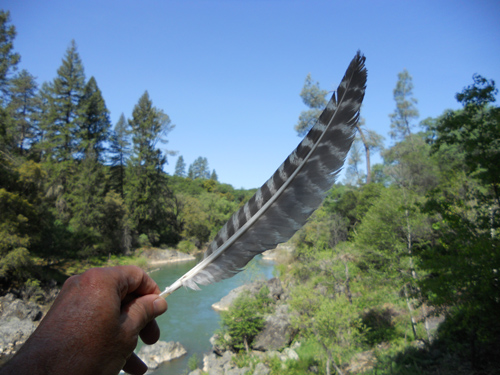 We returned to the clearing.  I placed the gift on his lap with a small rock to keep it from blowing away. 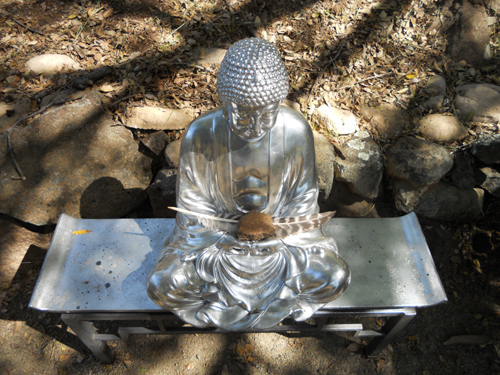 Now that’s what I call an auspicious run in the forest.  Want to come?