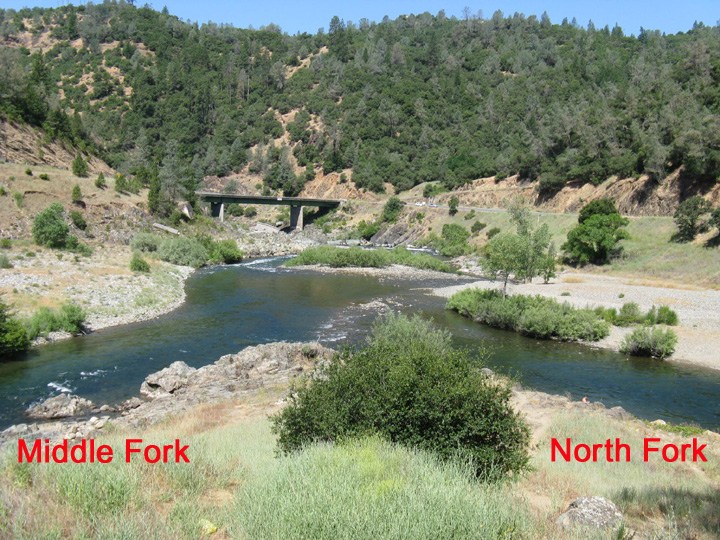 Confluence of the North and Middle Forks of the American

Confluence of the North and Middle Forks of the American

The Clementine Trail is a pretty four mile jaunt from the Confluence of the North and Middle Forks of  the American River upstream to the Clementine Dam and back.  The Confluence is about two miles below Auburn, California, down in the American River Canyon.  It is a popular spot for picnics and swimming, but you have to be damned careful, especially in the Middle Fork.  That part of the American is cold and dangerous.  The North Fork, at least down here at the Confluence, is mild and happy, so let’s run along that fork today.  I’m in a mellow mood and Dharma doesn’t care as long as we’re out running together.  North Fork it is!

Dominating the sights along the first part of the run is the majestic Foresthill Bridge.  It’s the highest bridge in California and one of the highest in the United States.  I’m going to write an entire article about the bridge soon, so for now, I’ll let the photos speak for themselves.

About a mile into the run, you come to Clark’s Pool.  It’s one of Dharma’s favorite places in the world.

This is one of the best swimming holes on the American River, or anywhere else.  The pool is much bigger than revealed in these photos with lots of rocks and beaches where you can find your own spot.  The current is hardly noticeable.
.

After  cooling down the pooch, you head up the main stretch of the Clementine Trail.  And when I say “up” I mean just that, for a mile, with little relief.  It’s not real steep, but it’s relentless.  And, the good news, it’s shady most of the way.

When you see the green gate, you are at the two mile point.  Your uphill work is done.  Don’t confuse this “green gate” with it’s more famous namesake on the Western States Trail.  That one is THE Green Gate.  This one is just the little green gate on the Clementine trail. But you’ll be happy to see it.

Just beyond the green gate, take the paved road down hill about a quarter mile to the Clementine Dam itself and Lake Clementine beyond.  Sometimes you meet nice people along the trail.

The Clementine Dam and Lake Clementine itself are pretty and hardly ever crowded.  There are boat launches and a marina.  You can get a glimpse of them in one of these photos.  Budget-cutting politcos have talked about closing this area, but so far have been blocked.

Lake Clementine from the Dam

Now run back up hill another quarter mile to the green gate.  OK.  I didn’t mention this extra half mile down and back up.  But you’re at the green gate, and it would be a shame not to go on down and take a gander at the dam, right?

The rest of the run is a snap, down hill for a mile, cool the pooch, then flat all the way under the bridge and back to the Confluence where you can cool the pooch one more time.  Yourself, too!  Running shorts, shirt, hat, shoes.  All of it.  Who cares?