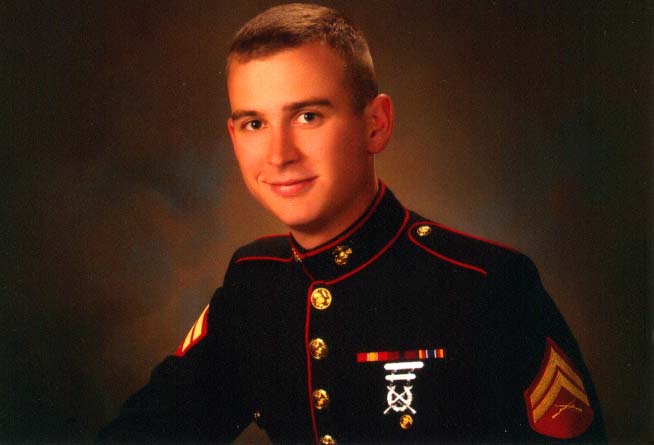 Corporal Robert “Luke” Jenkins, USMC, is the Alpha Company war correspondent for his unit currently deployed somewhere in southern Afghanistan.  These are his letters to the families of his fellow Marines.  Luke is our son.

Friends and Family of Alpha Company:

At the behest of the Commanding Officer and First Sergeant, this letter was prepared to help you stay apprised of the activities of Alpha Company. While the staff cannot promise full disclosure of every aspect of our experience in the coming year, the letter will strive to convey a general overview of training, living conditions, and some detail on the types of missions that your Marines execute.  Your Marines should fill in the specifics and anecdotes as they see fit.  The purpose of this newsletter is to help you, the families, maintain as much contact with your Marines as possible, and maybe give you something to ask when you get the chance to talk to them.  The CO and the First Sergeant would like to thank you for your love and support thus far.

It is important to note at this time that we are no longer a member of 6th ESB (Engineer Support Battalion), but have been officially attached to 9th ESB, 3rd MLG (Marine Logistics Group).  Part of this training period is to allow time for different units to integrate and practice the different roles they are expected to perform.  The platoons you remember from the family day and other occasions are still together, the company simply falls under a different umbrella.

The Marines arrived at 29 Palms on the 11th of February, 2010, after spending a night at a familiar place for most of the Marines who graduated from MCRD (Marine Corps Recruit Depot) San Diego: Edison Range.  This is where Marine recruits from the west coast spend a month learning the basic functions of field operations and complete the Crucible, which does not need any explaining.  The Marines spent a night in the familiar confines of a squad bay, but were instructed not to have any contact with the recruits so as to maintain the continuity of recruit training.

From there the company took a three hour bus ride east to Camp Wilson at Marine Corps Base 29 Palms.  It is located in the Mojave Desert of California and is reputed to be the best place to train for desert conditions such as the type we will be facing in Afghanistan.  Camp Wilson is about five miles from Mainside, where most of the barracks and commercial components of 29 Palms are located.

Camp Wilson is comprised mostly of living quarters called KSPANs.  They look like giant soda cans that were cut in half and planted on a concrete slab.  There are about forty Marines in each; a fairly tight fit, but comfortable.

The other components of Camp Wilson include a chow hall that serves breakfast and dinner, a decent (though over-priced) PX (Post Exchange), a chapel, a Warrior’s Club, and a laundry mat.

Upon arrival the staff was informed that that the company would be receiving a third platoon.  We now have a “bridge platoon” attached to Alpha Company.  The platoon commander is an alumnus of the Anvil,  Second Lieutenant Wolf.  It seems he can’t go anywhere without his old friends from The Anvil.

The first few days were taken up by what is referred to as “white space” training.  This is a period of time for the Marines to get used to the camp and start learning from senior Marines some of the skills and knowledge necessary for our mission.  The Battalion was also familiarized with some of the flora and fauna of the Mojave Desert.  PT (Physical training) was also a major part of this early portion of training, both to acclimate your Marines to the environment and to prepare for the physical demands of support operations in theatre (Afghanistan).

The major focus of training centers on convoy operations.  Most of the Marines are comfortable with construction, but the emphasis on movement around a given area of operation is meant to ensure the highest level of safety for the Marines.

Rifle and machinegun range training is to ensure every individual is prepared to perform effectively in whatever situation arises.  Other classes include radio operation, first aid, cultural awareness, vehicle familiarization, and a number of other essential skills.  Individual Marines have also been instructed in the nuisances of the radios, Blue Force Tracker, the cultural and historical climate of Afghanistan, and vehicle maintenance and recovery.

The Marines are getting some great hands-on experience in operating with the MRAP (Mine Resistant Ambush Protected vehicle).  The MRAP is the vehicle that will be employed most often by the Marines.  It is designed to survive the most common weapons used by insurgents in Afghanistan.  This vehicle is also equipped with ECM (Electronic Counter-Measures) in order to combat the threat of IEDs that have been so infamous in both theatres (Afghanistan and Iraq) of operation.

The Marines of Alpha Company also participated in a COP build.  For the unwashed masses of whom few have deciphered the enigmatic acronym vernacular of the Marine Corps, a “COP” is a combat outpost.  Building, improving, and maintaining these mission-essential assets is one of the most important tasks your Marines will perform.  These COPs provide Coalition Forces with the ability to sustain a presence in the more rural parts of Afghanistan.

One of the most colorful and entertaining classes was the Combat Life Saver’s course.  Each Platoon was trained by the new corpsmen (medical personnel) from Okinawa.  The course was designed to be comprehensive instruction in the most effective methods of treating injury in inclement conditions.  The class was dense and difficult to absorb, but the Marines came away with a better understanding of first aid.  The class also fostered a trust in our corpsmen and their competence.

Then the Marines were taught to place IVs and  every Marine in the class was required to both place one and receive one.  Your Marine should describe the specifics. Suffice to say that it was very good training.

After completion of Mojave Viper Enhanced (MVE), the Marines participated in a battalion-wide “field meet.”  The events were the nail drive, litter carry, obstacle course, rock toss, and tug o’ war.  You will be proud to learn that your very own Alpha Company Marines won first place out of the battalion.  Our prize: a rock.  Lance Corporal Carver is the proud custodian of our trophy.  The Marines of 9th ESB were then treated to a Warrior’s Night and allow to drink two beers (for those so inclined and of age) in celebration of the end of EMV.

The weather in southern California is pleasant most of the time, though it tends to be pretty cold at night and in the morning.  The KSPANs had no climate control so the Marines were left to their own devices to stay comfortable with varying degrees of success.  Most of the Marines were fairly content to stay warm by indulging in one of the few inalienable rights of all Marines: complaining.  It’s important to note the complaining is a good indication of high morale, so please don’t worry about your Marines mental state.

Living conditions improved enormously when Alpha Company finally left 29 Palms and arrived at Camp Pendleton, California.  The Marines are now billeted in what could be referred to as apartments, though they have more in common with hotel rooms.  They are provided with a small refrigerator, a microwave, and a bathroom.  It is a tremendous improvement over the austere conditions of the high desert in 29 Palms.

The days in Camp Pendleton are consumed with the final preparations before our departure.  Tying up the various loose ends of our constant movement from one place to another has proved to be a challenge, but not insurmountable.  The staff can report with confidence that your Marines will be provided will all the necessary tools and equipment to do their job.

That brings you up to date on the life and times of Alpha Company.  If you have questions, please don’t hesitate to contact the company at [email protected].  It would be a pleasure to answer any questions you have to the fullest possible.   Our plan is to send a new letter every two weeks.  Obviously sometimes this will fluctuate, but you can expect to see a new post along that rough time line.  Thank you once again for your love and support.